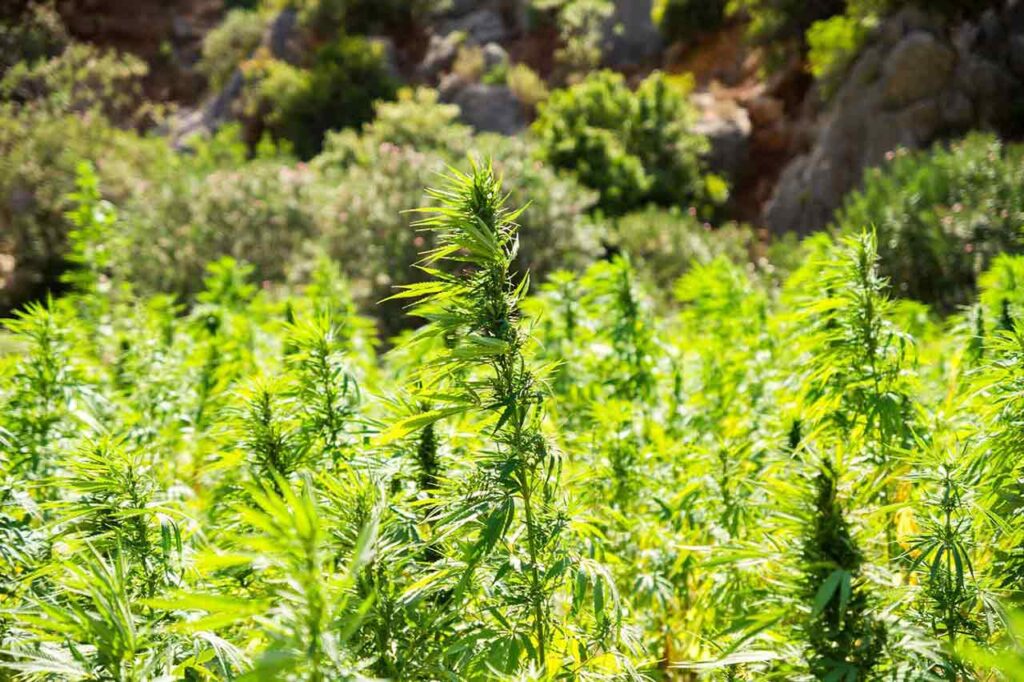 Public opinion about cannabis has changed rapidly in the last several decades. In 1969, only 12% of the US population supported the legalization of marijuana. By 2019, that number rose to an impressive 67%.

States are starting to pass legislation that reflects this shift in public perception. As of July 2021, cannabis is legal for medicinal purposes in 37 U.S. states and legal for recreational use in 18 states (plus Washington D.C.).

For people who live in states where cannabis isn’t legal, new isomers of THC are popping up on that market that is extracted from hemp-derived CBD.

If you’ve heard about delta 8 THC and the newly discovered delta 10 THC, you might be wondering what the deal is. Let’s take a look at everything you need to know about these different isomers of THC.

You might be wondering why we would start with delta 9 THC here rather than go in numeric order. Well, the reason is that when you think about THC, there’s a good chance delta 9 is what you’re thinking of.

Delta 9 is the main psychoactive ingredient in cannabis, meaning it’s the cannabinoid that’s responsible for marijuana’s famous “high.” Though it’s just one of several hundreds of active compounds in cannabis, delta 9 THC (often referred to as simply “THC”) is the most prevalent compound in the plant.

Delta 9 works by binding with cannabinoid receptors in your body which exist throughout your nervous system and in your brain.

By stimulating the release of dopamine, a neurotransmitter in the brain, THC can create sensations of euphoria. Different people can have vastly different experiences using THC. Some common experiences include:

Some people might experience some adverse effects when using THC. These include memory problems and anxiety.

In more than half of U.S. states, cannabis is approved for at least some medicinal uses. The list of states that are allowing the recreational use of cannabis seems to grow every year, though it is still considered a Schedule I substance at the federal level.

Delta 8 THC occurs naturally in cannabis plants just like the more well-known delta 9 THC. However, it isn’t a major cannabinoid-like delta 9, but rather a minor cannabinoid that only appears in very small amounts naturally.

This cannabinoid does have similar psychoactive properties and is considered an isomer of delta 9. However, the intoxicating effects are not nearly as potent as delta 9 THC. If you’ve used both cannabis and hemp-derived CBD, many people say that delta 8 is sort of like an in-between in terms of effects.

Some users claim that delta 8 creates a less anxious and smoother psychoactive experience than delta 9 THC.

The legality of delta 8 currently exists in a gray zone. This cannabinoid can be extracted from either cannabis or hemp. Industrial hemp is allowed to be grown in the US since the 2018 farm bill was passed, meaning that delta 8 that is manufactured from hemp-derived CBD should fall within the realm of legal.

What this means is that people who live in states where delta 9 THC is illegal can still experience some of the beneficial effects of THC without breaking the law.

Are you wondering how people take delta 8? Well, there are a lot of different ways. It can be ingested through a tincture, dabbing, vaping, smoking, applied topically, or in edibles like delta 8 gummies. Just like with other forms of THC, the way that you ingest delta 8 will impact how quickly you feel the effects as well as how long the effects last.

Both of these cannabinoids bind to the endocannabinoid system in the body in order to create psychoactive effects. They are similar in their chemical structure, with both of them containing a double bond. It is thought that this double bond is responsible for the intoxicating effects of cannabis.

The double bond is placed differently, however. While both cannabinoids contain a chain of carbon atoms, delta 9 has its double bond on the ninth carbon while delta 8 has it on the eighth.

Another isomer of delta 9 THC is known as delta 10. As you might imagine, the double bond in this cannabinoid is in the tenth position.

This isomer has come to light recently when a Californian company ordered a large amount of cannabis biomass that had actually been contaminated by fire retardant due to nearby wildfires. This company started processing the hemp in a normal fashion without realizing it had been contaminated. During processing, they noticed that their extract was presenting a strange crystal formation that they hadn’t ever seen before.

After several months of trying to identify the substance, they were finally able to identify it as delta 10. It has since been determined that the conversion of delta 9 to delta 10 was due to exposure to the fire retardant.

Since exposing cannabis to fire retardants in order to produce delta 10 doesn’t seem like the safest idea, an organic chemist sought out a more reliable and safer method to make the conversion happen.

Because delta 10 is so new, there isn’t a ton known about how it affects people. At this point, there haven’t been any formal clinical studies that dive into the safety and efficacy of this molecule.

At this point, however, there is a reasonable collection of anecdotal reports from individuals who have tried delta 10 themselves. Some of the reports claim that:

It’s unclear at this point what the optimal dose of delta 10 THC is. So far, many people report delta 10 to be relatively similar to delta 8 in terms of its potency. Of course, an individual’s weight, size, tolerance, metabolic factors, and more will determine the proper dosage for them.

It is always a good idea to start with a low dose if you’re trying a new compound. For example, if you were going to try delta 10 THC, you might want to start with around 5 mg and then wait an hour. You can then see how your body responds and increase the dose each hour by 5 mg until you reach a dose that produces a noticeable effect.

If you’re starting to feel a bit dizzy from all these different deltas, don’t worry. Let’s sort out all these details in a straightforward way.

First of all, the numbers in each of the names refer to the location of the double bond in the chemical structure of the molecule. This impacts the way that the molecule interacts with your endocannabinoid system and therefore the effects that you feel.

In terms of effects, you can think of delta 8, delta 9, and delta 10 as existing on a spectrum. Delta 8 is thought to be more relaxing and sedative, while delta 10 is considered nootropic and euphoric. Some argue that delta 9 falls somewhere in between, which different strains ranging from more relaxing and others to more stimulating.

One of the big differences between these isomers is how concentrated they are in cannabis. Delta 9 THC can appear in amounts as large as 30%, while both delta 8 and delta 10 appear in amounts as small as less than 1%. Basically, when comparing delta 8 vs delta 10, they are about equally as potent as one another and about half as potent as delta 9.

Does Delta 8 Show Up on a Drug Test?

Even though delta 8 isn’t as potent as delta 9, it is still a type of THC. Just like delta 9 THC, this isomer can linger in your body for quite some time after you use it. Some say that even for a first time user, THC can stay in a person’s urine for between four and eight days.

People who use delta 8 heavily might show up in a drug test for thirty to sixty days after use, if not longer. How long THC sticks around in your system has a lot to do with your current weight and how active you are because of the way that THC clings to fat cells. There are a number of other important factors, too, including length of use, cannabis tolerance, and more.

Basically, if you are expecting to take a drug test, you will need to allow enough time between your last use and the drug test for your body to naturally clear out any THC metabolites. If you are an occasional user, this might mean one to five days, and it might mean one to three weeks for regular users.

For people who are heavy users, you likely want to take at least four to six weeks in order to get rid of all of the THC metabolites.

While you aren’t breaking the law by consuming delta 8 THC, drug tests simply aren’t sophisticated enough to not come up with a false positive due to recognizing THC metabolites in your system. It’s possible that you can speak to your employer to help you avoid any hassle in this type of way.

So, what’s the difference between CBD and some of these different types of THC?

Basically, CBD (cannabidiol) is a different cannabinoid that occurs naturally in cannabis. The second most prevalent cannabinoid after THC, CBD has become increasingly popular because it seems to have some of the benefits of cannabis without the intoxicating high. People take CBD for a number of different reasons, including anxiety, depression, pain, sleep problems, and more.

If you are wondering whether delta 8 edibles will be more similar to CBD or delta 9 THC, assume it will be more like the latter. While delta 8 is thought to produce effects somewhere on the spectrum between CBD and delta 9 THC, it is still fair to say that delta 8 is more similar to its THC cousin than to the entirely different cannabinoid of CBD.

Are you interested in starting to take CBD, but aren’t sure what dose is right for you? Be sure to check out our CBD dosing calculator to help you figure out how much CBD to take.

Remember, it’s always a good idea to talk to your doctor before trying any new substance. CBD is known to have some interactions with medications even though it is otherwise thought to be very safe.

People use cannabis products for different reasons. Some individuals might be more interested in the psychoactive effects of the different isomers of THC, while others might want to experience some of the benefits without feeling high. Hemp-derived CBD is legal at the federal level because of the passage of the 2018 farm bill, and millions of Americans use it to help them with a wide variety of issues.

When it comes to purchasing CBD, however, it’s important to recognize that not all companies are created equal. You want to make sure that you are buying the highest-quality CBD and that the products you purchase are tested by a third party. That way, you know that you’re getting exactly what you ordered, nothing more and nothing less.

If it’s time for you to start your CBD journey, check out our storefront today!